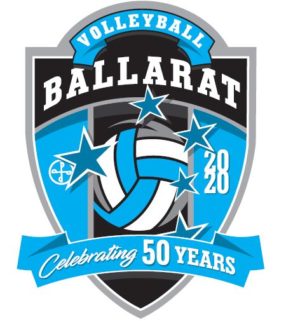 In 2020, Volleyball in Ballarat celebrates 50 years of Association hosted volleyball activity. This page will begin to chronicle those 50 years but we need your help to add some missing information and historical content. We hope to cap these celebration with a gala event on evening of Saturday 14th November to coincide with our annual Skins Tournament however this will be subject to review based on COVID-19 restrictions and subsequent effects on the volleyball calendar.

If you would like to be added to our mailing list for the event or have any stories, anecdotes, news clippings or photos, please email president@volleyballballarat.com.au

Volleyball Ballarat started life as the Ballarat Volleyball Association in late 1969 under the guidance and leadership of Ernie Bromley. Ernie began his involvement with volleyball in Warrnambool through the CFA playing at the YMCA, and when he moved to Ballarat he began to organise a social competition. In 1970 the Association proper was formed and the first structured competition began at the Ballarat YMCA in Camp Street on Wednesday nights with 2 Men’s and 1 Women’s Division, at a cost of 0.20c per person per game. Ernie was the station master in Ballarat and most of the teams were formed from local Fire Brigade crews and their families.

Eventually school students started to get involved from Central and North Tech and in 1973, a group of likely young lads led by a young John O’Neill and Peter Hassell turned up to try (possibly as a way of meeting girls…?) and became the future lifeblood of the Association. As 17 year old’s doing their HSC, they formed their first team as the Burrumbeet Surf Lifesaving Club, before re-branding as The Eiger Ninjas in 1974 and then F-Troop in 1975. It wasn’t until they landed on the moniker of the Phantoms in 1977 that they struck success, and the name stuck.

Their understanding of the game grew when Wally Saltys, who had moved from Melbourne to Ballarat to attend Teachers College, joined the team and so did their ability and ambition. By 1980 the legendary Thomas Santamaria was running clinics in Ballarat and a team was travelling to Geelong weekly to play a higher standard of competition. John was awarded a “colour” for volleyball while studying at the BCAE (Ballarat College of Advanced Education); to our knowledge the only one ever to receive this honour. It wasn’t the last time John was recognised in the sport, awarded Life Membership of the Association in 1993. 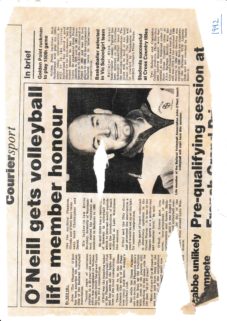 The competition has had a number of homes over it’s life. From it’s beginnings on two courts at the Camp Street YMCA, in 1978 it was relocated to the two courts at Mt Helen’s Ballarat College of Advanced Education (to become University of Ballarat and then Federation University) before moving to the new 2 court facility at East High (which became Ballarat Secondary College and now Woodman’s Hill) in 1990. An increase in teams and an opportunity to capture the growth corridor saw another shift to the 3 court gym at Ballarat High School in 1999 before a change in management saw the search for yet another venue. A strong relationship was built with Loreto College and matches and training were based there for over 15 before an historic MOU was signed with Ballarat Indoor Sports and volleyball moved to it’s new, permanent home at the 4 court Mars Minerdome in Wendouree.

Peter Hassell has been the mainstay of the Association, involved as a player, coach, referee, administrator and advocate for 47 of it’s 50 years. On court he has won domestic competitions, regional and state tournaments , Country Championships and National Masters titles but just as importantly has mentored several generations of volleyballers in his own unique way. He has served as Secretary, Treasurer, Vice President (current) and President of Volleyball Ballarat, served as Committee member and coach for Western Phantoms, Phantoms Volleyball Club and Phantoms Masters and has been on the Board of Directors for Volleyball Victoria. Perhaps his greatest contribution has been as a coach and junior development coordinator in Ballarat where he has inspired hundreds of kids to take up the game, including his own children who carry on the legacy of the Hassell and Phantoms names in the running of the Association today.

Ballarat has participated in regional and state competitions since it’s inception, including but not limited to, State League, Country Championships, Country Leagues, Affiliate Tournaments and other regional competitions. Click on the decade below to see some of the photos and articles we have gathered so far:

CLICK ON THE HOODIE BELOW TO SEE UNIFORMS OVER THE YEARS 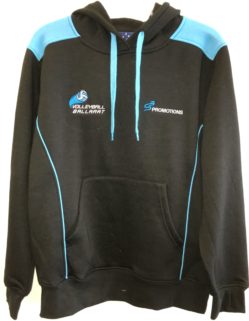